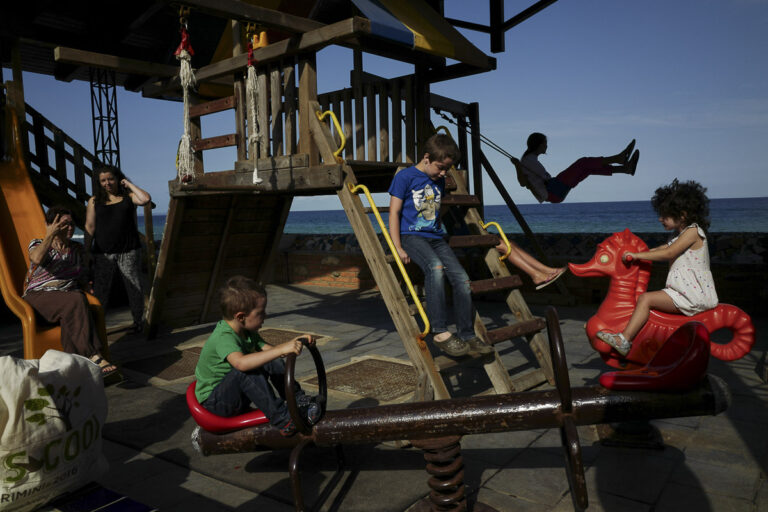 We invite you to our November Monthly Meeting on Thursday, November 19th online via Zoom. This time we will meet the Bolognese freelance documentary photographer Fulvio Bugani, who in his work he is dedicated to unravelling fascinating stories behind daily lives of ordinary people. In 2015 he was awarded the World Press Photo for his work about Muslim Indonesian Transgender. To us Fulvio will present his project “Unschooling”, a visual exploration of a non-coercive, cooperative educational method that advocates learner-chosen activities as a primary means for learning. Social greetings begin at 19.30, followed by the talk at 20.00. After Fulvio’s presentation there will be time for questions.

Unschooling is a non-coercive, cooperative educational method that advocates learner-chosen activities as a primary means for learning. It is an extreme form of home education, often considered a subset of homeschooling, even though it is philosophically separate from it. While homeschooling has been subject to widespread public debate, little media attention has been given to unschooling in particular, which is less common and still  rare all over the world, in those countries where it is constitutionally allowed.
The term “unschooling” was coined in the 1970s and used by the educator John Holt, regarded as the “father” of this method, where the student’s education is not directed anyhow by a teacher. Even though there are no formal classes taken and the children teach themselves, unschooling does not mean that parents give up active participation in the education and development of their children. They act as“facilitators”, providing a range of resources, helping their children access and make sense of the world. Unschooling encourages the exploration of activities initiated by the children themselves, believing that the more personal learning is, the more meaningful, well-understood and useful it is to the child. Unschoolers therefore learn through their natural life experiences including play, household responsibilities, personal interests, work experience, travel, books, family, mentors, and social interaction.
According to this philosophy, education is a matter of curiosity and desire rather than academic achievement. From this point of view the standard school is an inefficient use of the children’s time, because it requires each child to learn specific subject matter in a particular manner, at a particular pace, and at a specific time regardless of that individual’s interests, predisposition or any pre-existing knowledge he or she might have about the topic.  Proponents of unschooling assert that individualized, child-led learning is more efficient because it takes advantage of children interests, and allows a deeper exploration of subjects than what is possible in conventional education, while critics of unschooling are concerned about a possible lack of social skills, education, and motivation of unschooled children, who won’t be sufficiently equipped to handle the “real” world.

The project has been published on Marie Claire.

Fulvio Bugani is an Italian freelance documentary photographer based in Bologna. His work explores mainly cultural-social issues and the interconnection between society and people. What concerns him most is the daily life of ordinary people, which always hides fascinating stories. He actively collaborates with Doctors Without Borders (MSF) and Amnesty International, for whose he has done reportage on human rights. His work has been published on international magazines and websites like TIME, LFI – Leica Fotografie International, The Guardian, Marie Claire, Playboy, Zeke Magazine, Daily Mail, FeatureShoot, Trabajadores and Cubadebate.
In 2015 he was awarded at the World Press Photo, for his work about Muslim Indonesian Transgender, while his reportage about Cuba was awarded at the Leica Oskar Barnack Award 2016. Since 2015 he collaborates with Leica Camera and he has been chosen by Leica as its International Leica Ambassador. He has worked for important international brands and artists like Juventus Football Club, Zucchero Sugar Fornaciari, Universal Music, Leica Camera, Lamborghini. His work has been exhibited as installations, exhibitions and screenings at festivals and galleries Worldwide including the World Press Photo exhibition, Leica Galleries Asia and Europe. His work is part of the prestigious Leitz Park of Leica Camera at the HQ of Leica in Wetzlar among photographers as Joel Meyerowitz, Costa Manos, Thomas Hoepker, Ara Guler and more.
He teaches photography mainly in Italy and Cuba and he runs Workshop and masterclass worldwide for Leica Camera and for Foto Image (his private photo school in Bologna, Italy) as well as at Fondazione Cineteca di Bologna and Miami Street Photo Festival.

To this event apply safety rules as stated in the IWF COVID-19 disclaimer.